A Deep Dive Into Acala Network

With the empowerment of Polkadot, it is looking quite promising tha Acala Network can enable true interoperability, economic and transactional scalability. Acala was the first decentralized financial corporation to offer a set of protocols: a stablecoin protocol to play the role of Polkadot's DeFi building.

The project aims to issue Acala Dollar (aUSD) which is a decentralized stablecoin. Users can redeem 1 aUSD for each US dollar, Acala uses DOT, BTC, or ETH as collateral assets. People can send or receive USD easily across any blockchains connected to the Polkadot network. The project also designs to release staked assets (DOTs) as fungible & liquid assets (L-DOTs), extracting the derivative value of staked assets to fuel DeFi without sacrificing the security of the whole network. Acala Network is secured under Polkadot's shared security model, ensuring high resilience and forkless upgradability.

To really understand what problem that Acala is trying to solve, we will walk through what Proof-of-stake and Stablecoins are and their disadvantages:

When Satoshi Nakamoto was building the first-ever cryptocurrency, Bitcoin, he had to find a way for transactions to be verified without the need to use a third party. This he achieved when he created the Proof of Work system.

Essentially, Proof of Work is used to determine how the blockchain reaches consensus. In other words, how can the network be sure that the transaction is valid and that someone isn’t trying to do bad things, such as spend the same funds twice?

Proof of Work is based on an advanced form of mathematics called 'cryptography'. This is why digital coins like Bitcoin and Ethereum and called 'cryptocurrencies'!

Cryptography uses mathematical equations that are so difficult that only powerful computers can solve them. No equation is ever the same, meaning that once it is solved, the network knows that the transaction is authentic.

Lots of other blockchains copied the original Bitcoin code and as such, also use the Proof of Work model. Although Proof of Work is an amazing invention, it is anything but perfect. Not only does it need significant amounts of electricity, but it is also very limited in the number of transactions it can process at the same time.

As a result, other consensus mechanisms have been created, with one of the most popular being the Proof of Stake model. Proof of Stake was first created in 2012 by two developers called Scott Nadal and Sunny King. At the time of its launch, the founders argued that Bitcoin and its Proof of Work model required the equivalent of $150,000 in daily electricity costs. Since then, this figure has increased to millions of dollars.

The Proof of Stake model uses a different process to confirm transactions and reach consensus. The system still uses a cryptographic algorithm, but the objective of the mechanism is different.

While Proof of Work rewards its miner for solving complex equations, in Proof of Stake, the individual that creates the next block is based on how much they have 'staked'. To make things simple for you, the stake is based on the number of coins the person has for the particular blockchain they are attempting to mine.

Other advantages of Proof of Stake compares to Proof of Work:

Stablecoin since its inception to widespread popularity (at least in the crypto world), has proven its utility beyond speculation: they have been used in alleviating economic and political hardship, and as a hedging mechanism for traders.

The significance of cross-chain communication to the blockchain is like that of the internet to the intranet. Polkadot empowers a network of public, consortium and private blockchains, and enables true interoperability, economic and transactional scalability. Acala is a first-of-its-kind decentralized finance consortium delivering a set of protocols e.g. a stablecoin protocol to serve as Polkadot's DeFi building block

The Most Characteristic Features of Acala and how Acala use them to solve current problems:

Every aUSD is backed in excess by a crypto asset through Honzon Protocol, it follows the mechanism known as an over-collateralized debt position (or CDP). Together with a set of incentives, supply & demand balancing, and risk management mechanisms, the price of aUSD will be stabilized. The CDP mechanism design is inspired by the first decentralized stablecoin project MakerDAO, which has become the DeFi building block in the Ethereum ecosystem. However, in comparison with Ethereum, the Honzon Protocol can use Off – chain Worker to automate the process and increase the security and stability of the stable coin.

The value of one aUSD token is designed to peg to US Dollar at 1:1 ratio at all times through an automatic risk management algorithm within the Honzon Protocol together with community governance.

The value of collateral in every active CDP is constantly monitored by the Honzon Protocol to ensure that the associated outstanding debt in aUSD can be recovered anytime by selling the collateral. The Honzon Protocol will trigger the liquidation if an active CDP is considered to be too risky. And after the liquidation is triggered, it will run a special auction mechanism to cover the outstanding debt by selling the minimum proportion of the collateral as possible.

The Acala DeX protocol is inspired by Uniswap, but built as a runtime module as part of the Acala Substrate chain to serve the aUSD community. Each liquidity pool contains a balance of two tokens, and the exchange rate is simply the amount of one token divides that of the other. Users enjoys instant token swap without the need for an order book, whereas liquidity provider could supply liquidity of the two tokens in a pool to earn a fee.

Auctions are one of the stability mechanisms employed by the Honzon protocol to maintain a strong peg between aUSD and US Dollar.

In a Proof-of-Stake (PoS) network, there will be natural competition between assets being used in staking (for yields) and assets being invested in DeFi (for returns). This results in a tension between security and liquidity. For example, Polkadot intends to have 50% of the DOTs staked, the rest in circulation would be used for bonding, paying transaction fees and other. Can we have both security and liquidity at the same time? The 'Homa' staking liquidity protocol solves this dilemma.

Acala and all Substrate-based chains are fundamentally different from Ethereum. If they are trying to emulate an Ethereum node, they will suffer from the worst of both worlds. It will be a step backward for them to inherit all the restrictions from a legacy blockchain platform.

Acala sees EVM as one part of the Acala/Substrate/Polkadot, together the Acala network will provide a categorically different experience. Acala EVM will try to achieve these design goals

ACA is the native token of ACALA Network, its total supply will be minted at the launch of the mainnet and stored in the ACA Reserve Pool. Their token has three main functions in ACALA Network. First of all, ACA Tokens will be used as network utility tokens in order to pay transaction fees, stability fees as well as penalty fees in case of liquidation. Secondly, when holding ACA tokens, users will have the right to propose network upgrade and parameter adjustment, which will be approved or declined by the elected on – chain General Council. Finally, in case there is a price collapse of a collateral asset resulting in under – collateralized CDPs, ACA tokens will be automatically diluted and sold on the market for system recapitalization.

The roadmap of Acala development is very detailed and nearly all of their target has been achieved: 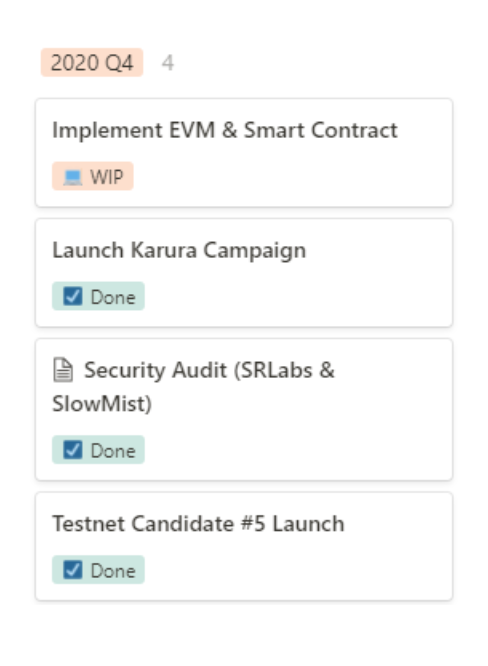 Acala has partner with many different projects to help Acala brings DeFi closer to Polkadot Network, also they are backed by many big ventures and investors, especially Web3 Foundation. This can be a key point that helps them win the Parachain Slot Auction.

The Acala Network core team is made up of many popular and potential people in the blockchain industry:

With all the features that Acala has. Acala will be a project that can fill in the gap of Proof of Staking consensus mechanism. Also, the stablecoin aUSD of Acala might play an important role inside Polkadot ecosystem in the future.