A Deep Dive Into Plasm Network

Plasm is a real-time module library based on Substrate. It is a place where developers can add Plasma features into their Substrate chain. By using this library, developers can build a blockchain which can be scaled within a couple of minutes. Substrate included two parts: Substrate Core and Substrate Runtime Module Library (SRML). Plasm can custom key points on Substrate with SRML and then create the new natural Substrate chain. Plasma is a layer 2 solution to scale up the blockchain. Plasma will help restructure the economic potential of the blockchain, this restructure will help blockchain can operate autonomously without the management of creator and operator. In the ideal situation, the blockchains of operators can be scaled without having any limit.

Plasm Network can be seen as an infrastructure which can scale and interact with Web3.0 . Plasm Network is built on Substrate. Thus, Plasm has very high potential of becoming a parachain of Polkadot in the future and will work as a scalable smart contract platform. This allows Plasm to fill in the gap of the Polkadot’s design. The ability to extend is surely one of the most crucial demands that DApps developers need and if they choose Plasm, they won't have to worry about the scalability.

Plasm Network aims to create the best smart contract platform so that developers of DApps on Polkadot don’t have to worry about infrastructure and just need to focus on their DApps. Furthermore, any developer can build any application on Plasm Network without considering its scalability. Plasm Network solves both of two biggest problems: Scalability and Interactive ability.

Most blockchains can not scale up because they are designed for “decentralized consensus”. Their TPS (Transactions per second) is tremendously lower than centralized databases and the amount of data which can be stored in each block is limited. So, in the situation when the amount of transaction spike, transaction of user can be: unconfirmed, delayed for a very long time or even worse, failed. This makes users who are familiar with traditional architecture feel disappointed.

There are several blockchains that live out there, but most of them can not interact with each other, this is a big loss for the blockchain ecosystem. If you want to convert a coin from Bitcoin network to Ethereum network, you have to send that coin to a centralized exchange, sell it, buy another coin and finally, withdraw to your wallet. This is a waste of time and costs an uncountable fee. Polkadot is a protocol which allows different blockchains Interact with each other in a seamless way. And also because of that, Plasm Network is connected to Polkadot to take advantage of its interactive ability. Different chains interact with each other, plus the scalability of Plasm is definitely the greatest solution for the situation of blockchains nowadays.

With the dream of becoming the smart contract supplier for the whole system of Polkadot, architecture of Plasm has to show that it can take this great responsibility.

It will be easier to understand if you look at the picture below: Plasm nature is a layer 1 blockchain built on Substrate or “maximized Plasma protocols”.

Besides, development team of Plasm also develop modules like: 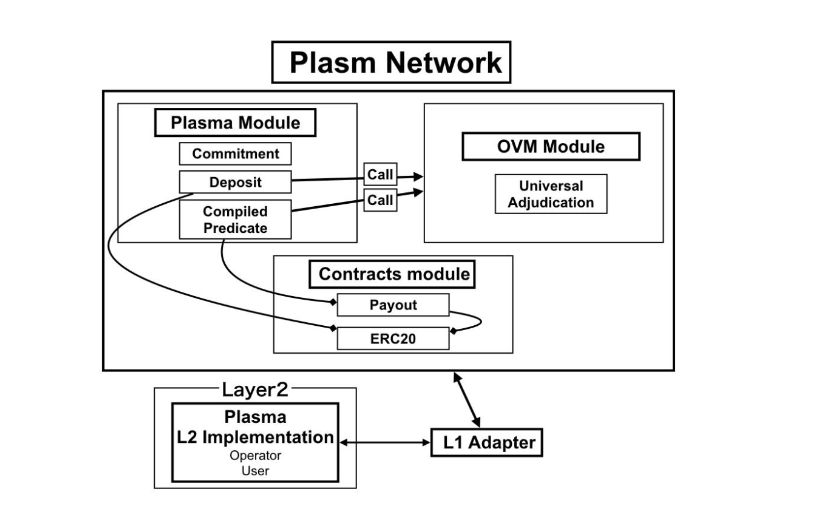 Applications on Layer 2 can be created through Layer 1 adapter. In conventional models, we can deploy Plasma of Ethereum including a lot of modules managed by a bunch of smart contracts, with this model, you can not guess exactly how much transaction fee it would take for a Plasma application because these smart contracts have a lot of layers of logic. Moreover, having too many smart contracts will make it harder for developers to understand. Instead, OVM works in a simple different way, these smart contracts will be packed in three modules: OVM module, Plasma module and Contracts module.

The Most Characteristic Features of Plasm Network

Beside the development of modules, Plasm Network also has features to encourage users to use and contribute to the network so that the network will become more stable and strong.

As noted above, lockdrop is a new way to distribute tokens. The first lockdrop had 16,783 ETH locked, this is huge and can show us how much the community cares about the Plasm project. Token release events will be seperated to make sure that project will have a stable supply.

Lockdrop also has another mechanism: Multi-lockdrop. Multi-lockdrop can also be understood as lockdrop multiple times. This mechanism will help limit the number of whale holders (people who own a lot of tokens) if there are just a few of early-bird buyers. Also, this mechanism makes the distribution fairer and evener. Besides, the security and integrity of a blockchain depend on its meed for nodes and token holders. If this mechanism keeps repeating again and again, it will be easier for Plasm to understand the token distribution for its holder and also reduce the maintenance costs to fix the problems when the network does separate token distribution events. Equation of multi-lockdrop events is always: a_1 : a_2 : a_ 3 = 6:5:4. As shown below, PLM token pay for the first lockdrop is 1,200 PLM, the second lockdrop is 1,000 and the third is 800. The ratio of all 3 phases is 1200:1000:800 = 6:5:4.

Token of Plasm Network is PLM and it can be used for:

It is easy to see that Plasm Network is a missing piece of Polkadot Ecosystem. Smart contract is a very necessary feature for such an interactive platform like Polkadot. With modules like OVM, Plasma, Contracts module, Plasm will have more ability to interact with Layer 2 DApps. Furthermore, Plasm scalability, faster TPS, cheaper transaction fee definitely a plus mark while popular blockchain like ETH is becoming slower and its transaction fees is rising day by day. If Plasm Network win parachain auction, its potential definitely will be huge.